Her Worship the Mayor Cllr V.V Bam, along with Speaker of Council uMntwana Cllr S.O Zulu accompanied by Councillors and Municipal officials from the Engineering Services officially launched the water supply and improvements project at Eastbourne which is situated in Amajuba District under the Dannhauser Local Municipality (KZ254) area of Jurisdiction.

The objective of the project is to improve portable water supply to the inhabitants of the area as per yard connections level of service.

As a result the Eastbourne and Skombaren Water Supply Scheme will be supplied by the 32 Kl elevated tank from Braakfontein.

While the project seeks to address water supply challenges it will further come as a relief to local communities who will benefit from the job opportunities to be introduced as part of the implementation of this multi-million rands projects.

A representative from Lukhona Projects and Development Mr.Sihle alluded to that “ the project also aims to uplift the community as part of the EPWP programme by employing 30 people which will accommodate representation from gender base i.e women and men, youth, and people living with disabilities.

Mayor V.V Bam called on the local community to take advantage of the opportunities to be provided by this project but also pleaded with the locals to give a fair opportunity to the most disadvantaged people for them to at least have something they can put on the table and be able to eat with their families. She spoke against the idea of having the already well-off members of the community competing with the poor for these limited opportunities.

Mayor V.V Bam further pleaded with the local community to ensure that they are not part of activities that seek to cause delays in the completion of the project. She said that it has become a common yet disruptive practice that communities will engage in illegal connections, stealing of material and disrupting the progress through protests. She said the best way for the community to protect this project is to own it and be jealous about it. 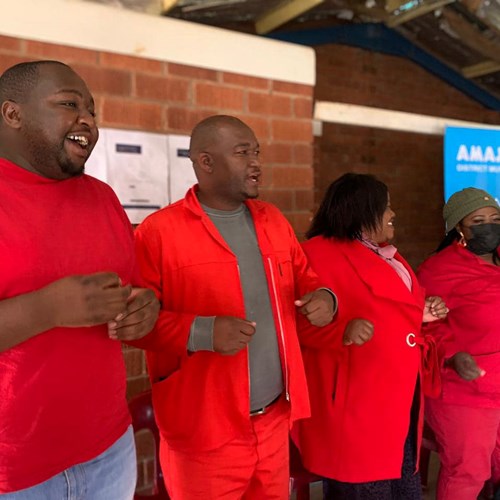